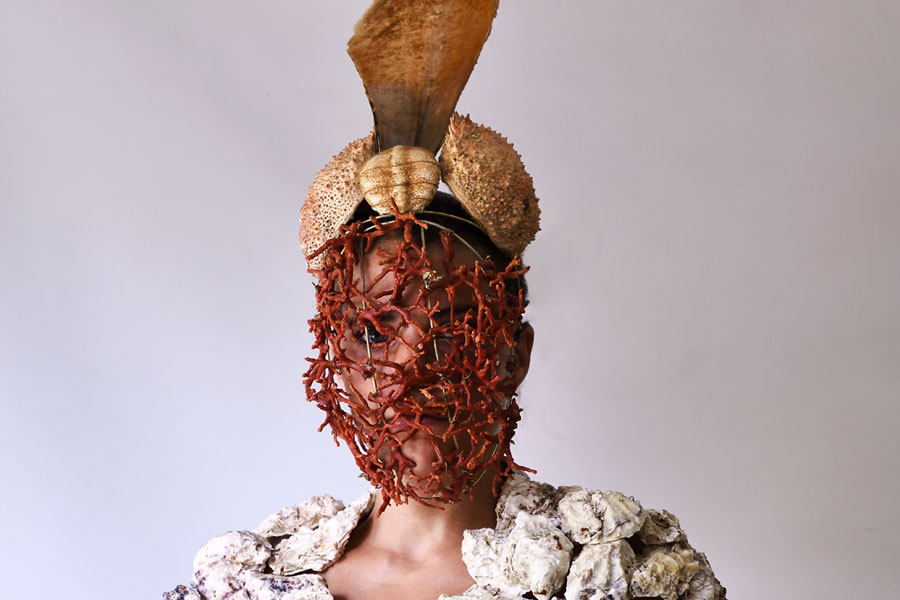 Resilient is a series of 3 pieces made with natural materials that speak about different conflicts and denounce how our actions have led the planet to a stressed situation.

In this piece, we find Nacra (Pinna Nobilis), Spider Crab (Maja squinado), Oysters, and Red Coral from the Mediterranean.

Coral has many factors that make it suffer an extreme situation that if we do not stop it will lead to its extinction. Threats include rising sea temperatures and acidification, direct harvesting for jewelry, mining and construction, for decorating marine aquariums, for making calcium supplements, and for medical use.

Despite the enormous effort of many people to avoid it, licenses continue granted allowing extraction and commercialization. The red coral that I have used was extracted in the 70’s in the Cap de Creus. They are the remains collected by the father of a friend, which the coral pickers considered very small for commercialization at that time. Nowadays coral colonies rarely reach these dimensions. The coral grows from 3 to 5 mm. Per year. I had many dilemmas while making this piece, because of the critical situation the coral is in nowadays, but even so I decided to use it to denounce the current situation.

For this piece, I also used a Nacra that my grandmother had. The Nacra is the largest mollusk found in the Mediterranean, has had to face the threats of the fishing, the contamination, and the reduction of the posidonias, its natural habitat. But they are now critically endangered because they have lost more than 90% of their population in last three years because of a pathogen that has killed them.