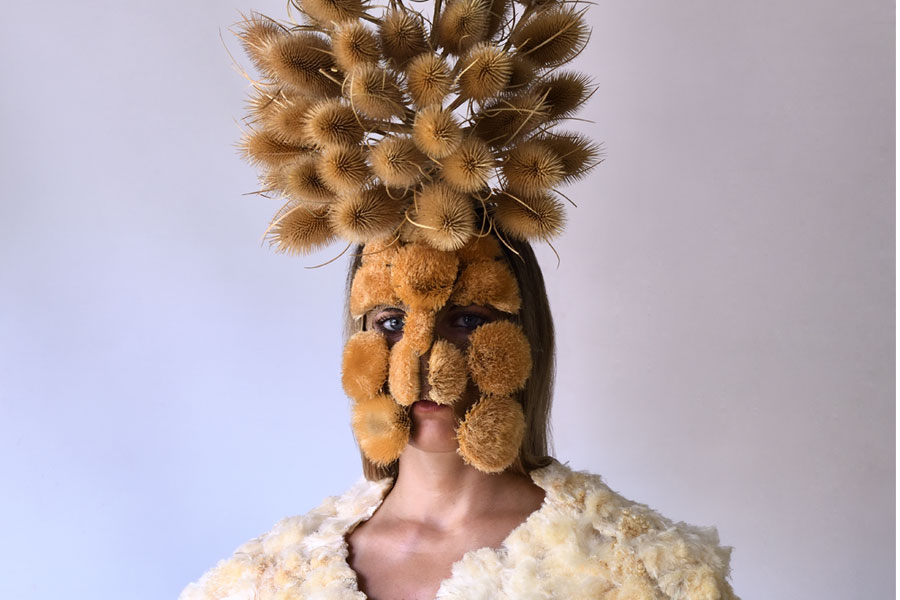 Resilient is a series of 3 pieces made with natural materials that speak about different conflicts and denounce how our actions have led the planet to a stressed situation. In this piece, we find wild teasel (Dipsacus fullonum), Carlina (Carlina acaulis), and miraguano (Araujia sericifera).

The Carlina is common in the mountains and meadows of Central Europe and the Pyrenees. Its main applications derive from its essential oil that presents antibiotic agents, also is used as a natural barometer since the meteorological changes affect the form of its leaves. In many areas of northern Spain, it is placed on the doors and windows of houses as a symbol of protection from witches, dragons, and other beings that endanger life and happiness.

Because of the many qualities that it has was almost on the verge of extinction due to its massive harvest, which is why in some countries it is a protected species. The parts used are harvested without pulling out any plant, after the plant has released the seed the wrappers fall off which are the parts you see in the mask.

The Miraguano was introduced in Europe during the 19th century as an ornamental plant and also as a textile to use the fiber of the fruits as a filling. The Miraguano after being introduced by human hands has become an invasive species, climbing over trees and bushes on which it forms dense leaf masses taking away the light and competing with the humidity and nutrients of the soil.

On the other hand, the same thing has happened with the wild teasels on the other side of the world since it was imported from Europe for the carding of wool. The wild teasel is an invasive weed of increasing abundance in the Province of Buenos Aires, fundamentally of protected areas, pastures, and margins of roads. It is indicated that this species has caused significant negative impacts, such as a decrease in native floristic diversity and a reduction in available forage.